The term Single Cell Protein (SCP) refers to the dried microbial cells or total protein extracted from pure microbial cell culture (Algae, bacteria, filamentous fungi, yeasts), which can be used as food supplement to humans (Food Grade) or animals (Feed grade). Most of the developing countries of the world are facing a major problem of malnutrition. Due to rapid growth in the population deficiency of protein and nutrients are seen in human food and as well as animal feed.  Single cell proteins have application in animal nutrition as: fattening calves, poultry, pigs and fish breading. In food it is used as : aroma carriers, vitamin carrier, emulsifying aids and to improve the nutritive value of baked products, in soups, in ready-to-serve-meals, in diet recipes and in the technical field in : paper processing, leather processing and as foam stabilizers.

It has been estimated that if necessary measures are not taken the malnutrition condition will lead to some major crisis in the developing countries. Therefore it is very important to increase protein production and also its availability to the population by utilizing all the available ways and also methods. The increased world demand for food and in particular feed protein spurred the search for non-conventional protein sources to supplement the available protein source. SCP production technologies arose as a promising way to solve the problem of worldwide protein shortage

Interest in microbial protein for animal fodder largely depends on production costs in relation to the prevailing price of the main market competitors, particularly soya protein and fishmeal. The reason that more microbial protein is not currently produced for fodder is due to the present low price of these conventional protein sources. However, this may change, as there have been forecasts of future shortages of soya and fishmeal.
Rapid developments in microbial protein occured during the 1960s and 1970s. Extensive research was conducted on a wide range of microorganisms as possible alternate protein sources, motivated by large increases in the price of conventional animal feed.  SCP is not pure protein, but refers to the whole cells of bacteria, yeasts, filamentous fungi, or algae. SCP also contains carbohydrates, lipids, nucleic acids, mineral salts and vitamins. The composition depends upon the organism and the substrate which it grows. If SCP is to be used successfully, there are five main criteria to be satisfied:

1. The SCP must be safe to eat.
2. The nutritional value dependent on the amino acid composition must be high.
3. It must be acceptable to the general public.
4. It must have the functionality, i.e. characteristics, which are found in common staple foods.
5. The economic viability of the SCP process 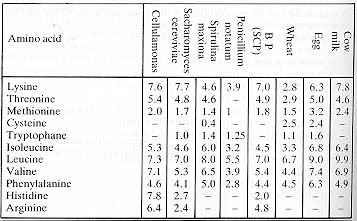